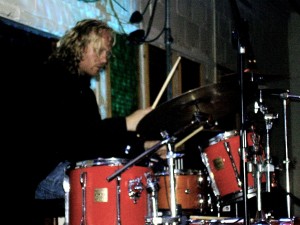 Neil Evans began playing drums at the age of 16. He was lucky enough to already have a great mentor who was not only a fantastic professional drummer but who also was his uncle, Jan Evans. Quickly finding himself in a lot of diverse musical situations, found himself in his first band, ‘The Rhythm Method’. This was his first big band, playing a lot of original music with excellent musicians, and some really great gigs, most notably support Noel McCalla and the Main Stage at the Larmer Tree Music Festival.

It was at this time Neil found himself doing a lot of deps, one of the bands was a band called ‘Street Level’ it was here that Neil met Dave Hum, who he later joined in the foundation the band ‘The Huckleberries’.

The Huckleberries was a completely different style and direction that provided a breath of fresh air. It was in this band over the next 19 years that culminated in a lot of big gigs, Stainsby Festival, Larmer Tree Festival, Glastonbury Festival, Royal Albert Hall to name but a few.

Also at this time the band was asked to be in and provide the music for the 2000 BBC series ‘Down to Earth’ starring Pauline Quirke, and Warren Clarke, this was aired on sunday nights on BBC 1 and had large viewing figures.

After this the band seemed to be busier than ever, performing many large gigs around the country.

Alongside the live playing Neil has been teaching drums for the last 20 years. Having pupils at all stages, and all ages, Neil has always enjoyed the challenge of making learning the drums as enjoyable and exciting as possible and recognising that everyone learns in different ways. Currently Neil is teaching at eight schools and privately.